What Stays in Vegas

What Stays in Vegas

In a way, I’d never been in Vegas. In fact, I always felt uncomfortable calling it Vegas because I figured I should call it by its more formal name, Las Vegas, and not show it a familiarity that was false on my part.

But, as usual, I’m partially lying.

In truth, I had been there before. My stepfather, when I was about 11, obtained a Packard, a straight eight, a rare car. He decided to pick up his father in Los Angeles, and along with me, drive to the desert. Somehow on the way back he drove through Las Vegas to get gas. All I remember was that it was in the middle of nowhere and inside the service station office was a chromium machine. I had two nickels. I gambled the first nickel and pulled on the cold chromium arm to see what would happen.

The second time I gave it a spin and I got two nickels back. I put them back in my pocket, we got back in the car and headed West.

Now it’s over sixty years later and Barb takes me there for my birthday. We stay at the Waldorf. I expected it not to be art deco like the one in New York.

I was right. We decide to go to The Rat Pack is Back show because Barb and I love Sinatra and Sammy and Dino, and a because I’m an old man and wanna indulge in nostalgia, on accounta it’s my birthday. For many old men who have survived the 70’s, nostalgia has become our drug of choice.

That night we motor down what they refer to as “The Strip” in a black limousine just like in the movies. 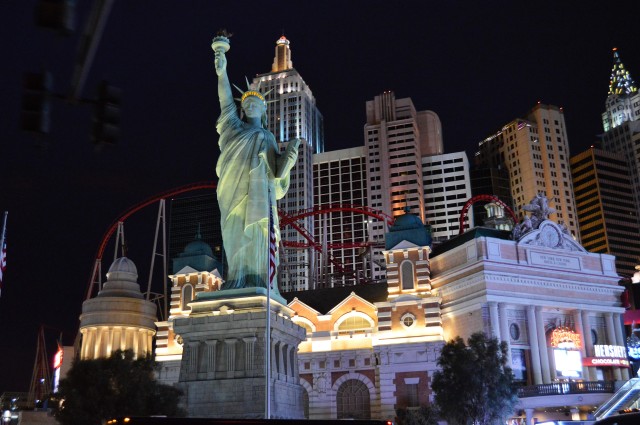 Barb just had her hair done yesterday and it’s Werewolf of London perfect. She’s wearing something simple and black but for contrast wears a long gold chain that dangles invitingly, between her gorgeous twin-peaks of comfort. If this was the first time she was here, she’d be sporting nylons and smoking cigarettes. Even nowadays, with Barb at my side, I feel ZZ Top bad, real Nation-wide. I feel like a big wheel, a gangster, or a politician, and Barb is having a good time pointing out places she recognizes.

“There’s one of the wedding chapels I got married in when I was Mrs. Coffee. And there’s where Elvis got married!”

A block, and dozens of wedding chapels later, she looks again and says,

“I think that’s the second one! That was with Rick.”

OK. So much for dusty past history. Tonight, we’ll make a new history of our own.

Eventually we get to the Tuscany and this is the first real casino I’ve walked through.

Wow. Everything is big. Everything is glitzy. Lots of action, but you can’t understand how it all works. But I feel secure with Barb on my arm, she’s been here before. I’m the only virgin in Nevada.

Where are the loose women and gangsters, the Russian oligarchs, the Saudi princess, the oil tycoons? These folks just look like, you know, people, like people from anywhere else but here.

Wow. Time to go to the show.

So, The Copa Room, they call it the Copa Room. I’m laughing because it reminds me of Barry Manilow, lets us in early because Barb’s foot’s been bothering her. Gives us a little round black table about 20 inches across and 2 little chairs right next to this stage which is about 2 feet high.
After a while the musicians show up you can see them poking around behind the curtains. They’re carrying different cases for different shaped instruments. They start making noises they’re like testing their instruments behind the curtain and they’re loud you know, and I’m thinking,

“I think we’re sitting a little too close to the stage.”

I look over my shoulder and there’s some people coming in but there’s still spaces over on the right hand side, farther away you know, where it won’t be so loud and I’m thinking we ought to, before it gets too packed up, we better jump over there, but as usual I do nothing.

Next thing I know, Oh, and by the way I must tell you that when they all came on stage they first walked around right in front of our table between us and the actual stage, it was about two feet away, maybe not even that, and they walked right by each of us and we shook hands. A lady next to us tried to bump, you know, bump knuckles, with the Frank, and he said,

Anyway, Sammy Davis Junior is saying that this is Frank Sinatra’s birthday today and because of that, hold on, they’re going to give him a birthday gift, they’re gonna give him a Bunny, and Dino is making little squiggly faces with his nose and I’m thinking,

But then, from the right-hand side, a lady appears and this lady is real pretty she’s got long hair, she’s got the face of a Madonna but below that is a woman built like a brick s***h****.

I’m sorry, it’s the only way to describe her. She has a Rubenesque-voluptuous-hard-to-put-into-words figure but on top of that Madonna face, on top of that dark hair, she has Playboy Bunny ears, and you can imagine where below the face she has pinned this little white Powderpuff-Girl looking tail, and I don’t know, maybe fishnet stockings or something because she has a whole lot of leg going on, and this unknown lady steps over to the corner where the stage is right next to Barbara.

Barbara is three feet from the lady and the lady looks out over the audience and says,

Barbara swings her left hand with her French-tipped nails in a magnificent arc with her thumb out, and points at me.

The lady comes down off the stage. Next thing I know she’s standing right in front of me and of course I’m sitting there on of those little flimsy chairs. She looks down and says,

But I’m thinking I’m ever the gentleman and there’s only one thing I can do… go along with the lady. After all, what with the ears and all, she’s much taller than me. That makes her authoritative. Next thing I know she’s sitting on my lap! This strange lady, a very unknown-and- strange-to-me lady, is sitting right on my lap, and next thing I know she’s taking off my glasses, actually removing them from my face, and she’s singing Happy Birthday to You to Me!

She’s singing it in the way Marilyn Monroe, who she kind of resembles, in a dark-haired-well-built sort of way, in the same manner Marilyn sang it to President Kennedy. Like she was familiar with him, like she knew him in the biblical sense.

I am convinced now that my ancient silvery hair, glowing in that blinding spotlight, could be seen by the very back row of old codgers with no problem, even with the impaired vision of most of the people here. So, she tosses my hair, she takes off my glasses, she sings happy birthday and then when she’s done, she hands my glasses back.

So in a way, I’m just talking to her, but she has a little microphone, and I say,

“Oh my God. You’ve gotten your fingerprints all over my glasses!”

And I shout, I actually shouted, this is what’s way embarrassing about this, I shout,

Where has my maturity gone? I must have left it the moment I walked in the door.

I’m sure, looking back, that the expression “What happens in Vegas stays in Vegas” is very cute, makes good copy, and sells a lot of hotel rooms and gambling.

But it doesn’t ring true for me. I’ll be telling this story the rest of my life.

P.S. I’m not really convinced Barb wasn’t up to something. After all, she was the one who pointed me out. I never know what she has planned for me.

I just love it.