I was working a package delivery job during the day and working on a teaching credential at night. Sometimes, when it got slow, I’d read Kerouac in The Beat Reader. You know, the Beat Generation, our spiritual get-high or get-to-heaven forefathers. My phone chimed a text message in its nasty irritating way.

“You have a delivery, at UCSD Law Center. Not at the center exactly, but at an awards ceremony. Look it up on your GPS. Make sure it’s ASAP.” I live in a world full of acronyms but not enough love.

I didn’t mind the drive to La Jolla, it was relaxing and scenic. First I’d take the Five North then snake up the golden hills overlooking La Jolla Cove and wind my way down the other side through silhouetted pines  and palms overlooking the sparkling Pacific. But I’d better hurry, it would soon be dark.

In the production room I picked up the trophy from Jim.

“Be careful with that one,” he cautioned. “It’s the real deal. Solid silver.”

“Not the plastic covered in chrome?”

“Just lift it. You’ll see. Like an elephant’s foot. Solid Rosewood base too.”

I lifted it up and read the inscription through the plastic wrapper. “Most Promising Malpractice Attorney of the Year.”

“A malpractice attorney gets a trophy? What for?”

“For making the most money.”

When I got to UCSD, there was a gigantic room filled with people dressed to the nines. Long tables with white tablecloths and chairs for dozens placed at each side. Candle-lit globes sat in the centers with garlands of white plastic chrysanthemums. Even with flowers the room seemed stuffy. Attorneys, judges, educators, local politicians, stood around talking in tight little circles that formed and reformed. Some men in ill-fitting tuxedos shuffled like penguins between the white table clothes and chintzy flower arrangements while they foraged for hors d’oeuvres with distended stomachs bursting with gas.

The wives, on the other hand, were elegant, especially one. She was sitting alone and gazing at a man standing across the room who was wearing a green crushed velvet tuxedo. He was surrounded by five or six women like a gaggle of geese waiting to be fed.

She was wearing a green satin sequined spaghetti strapped dress that fit just so and spiked high-heels. Her exquisite face was 21st Century Aphrodite. Her dark shoulder-length hair, her sublime figure of perfect proportions, were to die for. I could feel her electricity three tables away.

“How’s your wife Carlotta?” giggled one of the geese to Crushed Velvet Guy.

He turned and pointed her out with his chin since he had a Martini in each hand. “Oh, she’s doing just fine.”

They all turned and looked, then turned back and tittered to each other. Then he laughed like an idiot which they all found terribly amusing and laughed like hyenas in response. If he’d let them, they’d lick the butter off his croissants.

I thought the woman sitting alone was wringing her hands at first. She was having some difficulty and I couldn’t be sure what it was, but it was worth crying about. Darkened tears ran down her soft white cheeks, stained with mascara and solitude. You’re never more alone than when you’re surrounded by people.

I pulled up the next chair over, put the trophy on the table, and sat next to her.

“Having a hard night? What’s the problem?”

I reached for my handkerchief in my back pocket and the Beat Reader fell out.

I held her chin gently in one hand and dabbed her cheeks using the handkerchief with the other, and looked in her eyes. It’s funny what one man can see in a particular woman’s eyes that other men miss. That diamond ring? It wasn’t disguising the truth.

The strange woman with the incredible face glanced down.

She riveted me with her eyes. I’d see that look. It was the look a teacher gave you, when they already knew the answer.

Her eyebrows went on fleek. “Kerouac?”

How did she know? 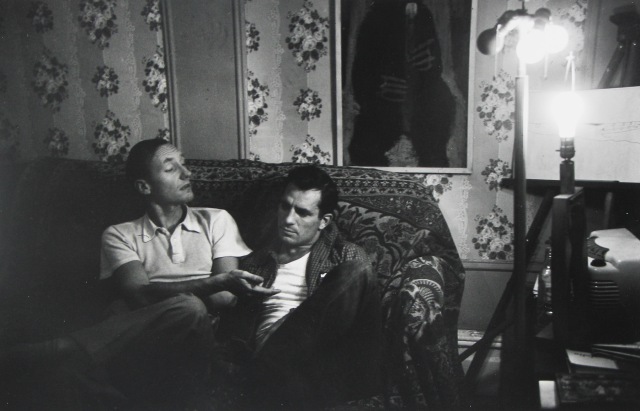 I used to teach English before… before…”

She gestured towards the total stranger who was her husband with a magnificent sweep of her hand. It was the short fella in the crushed green velvet tuxedo surrounded by the five lean and hungry paralegals.

I took two glasses of Chateau La Fit Rothschild 75 off the table and gave her one. Funny thing is, even before I took the first sip, I was already intoxicated. It was the sparkle in her eyes what did me in. For a guy, I’m quite the drama queen, so I said,

“Here’s a toast to freedom and a new future,” I said, and we touched glasses. Then I found a plate of butter and we worked off the ring. The second it came off, she gave me the biggest smile I’d ever seen. It was one of those warm-candle-glow looks that inspire fire.

What I was thinking about couldn’t be done here, and I have to admit; even then, after all of cosmic minute, I knew I was falling in love.

I grasped her hand and we bolted out the stainless steel double doors. Not one person in the room noticed we were leaving until she took the ring and threw it back. You wouldn’t think a ring would have that much velocity, it was only three carats. Then again, this particular ring was weighed down with serious meaning for ballast and hurled with great force. It tipped over the silver cup Crushed Velvet Boy was about to receive, set it rolling on its side until it fell off the table and dented itself grievously, giving a cold metallic shudder that ran up his spine.

By the time everyone looked towards the doors, we were already half way to Harry’s on Girard St. for coffee. We parked in back. Someone on the crew had a radio with oldies on in the kitchen. You could hear Ella Fitzgerald singing Like Young. Plates and cutlery were clattering, and a couple of couples in the booths were chattering. They were having a good time.

Carlotta and I, with our heads together, sitting side by side, were doing the same thing. Intimacy with a loved-one, so tenderly expressed, never bruises your heart.

The mystery about how Carlotta and I met and our instant attraction will never be solved. And I don’t want it to be solved because it’s a miracle, and miracles can never be solved.

That’s just how God works it.