Where’s Scorsese When You Need Him? 4

Ellis Island was tomorrow, and as Scarlet O’Hara once said,
“Tomorrow is another day.”

I say this like I know what I’m talking about. Like I’m Field Marshal Rommel or something. I don’t. For me, a battery is some kind of collection of guns, like big guns, like Napoleonic Wars to WW2 collection of very large guns. Like a Battery of Big Berthas. I read that when Napoleon was just regular soldier he commanded a battery of canons.

Either that or a battery is some kind of electricity storage device. There are wet cells and dry cells and all kinds of batteries big and small. We all know that. We charge the suckers up every day. We trip over our battery charging wires every night. What I can’t figure out is how or why a place is called a battery. They call this place we’re going “The Battery”.

The driver is a girl, a young girl, but I can’t give more details because she’s wearing a dashiki. The pattern is typically Somali. In San Diego we have whole neighborhoods of Somalis radiating off University Avenue. I catch some of their kids in English classes. Some of them have sects that are the oldest Christians of all. I have no idea why. Sir Richard Francis Burton would know, but he’s too hard to get ahold of, since he’s been dead these many years. But you know Sir Richard; he’d appreciate having an attractive female guide. Miss Somali, her eyebrows kootched together, looks down her delicate nose, working out the directions on her I-phone with her fingertips. She smiles to herself, you can see it in her mouth, it’s that smile of understanding we all make, and off we go.

These streets look like New York streets to me but really they’re more Manhattan streets than New York streets. I wonder if there’s such a thing as New York at all. Maybe it’s as varied as its collections of boroughs and has as many faces as the moon. 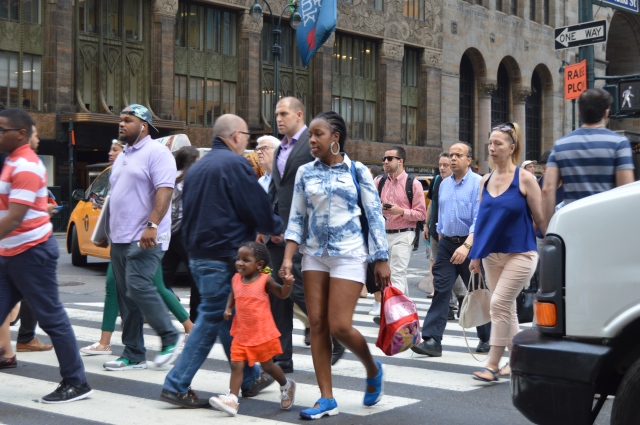 But right when I’ve imagined I’ve figured everything out about the streets of Manhattan, I spy something straight out of Taxi Driver, the opening credits where the taxi goes through a cloud of steam rising up out of the street.  OMG OMG  reality it taking on aspects of cinema!

And to make it even better, for reality is always stranger than cinema “there are more whatevers in your cosmos dear whoever than are dreamt of in your philosophy”. But as we travel through this cloud of steam a figure appears and it’s a red-headed man with a long red beard and even though it’s not raining he’s carrying an open umbrella with stuff glued on top of it. When I take a picture, he spies me as we wiz past and gives me a dirty look, like he doesn’t want me to see him much less take his picture. Like he doesn’t want attention or something. 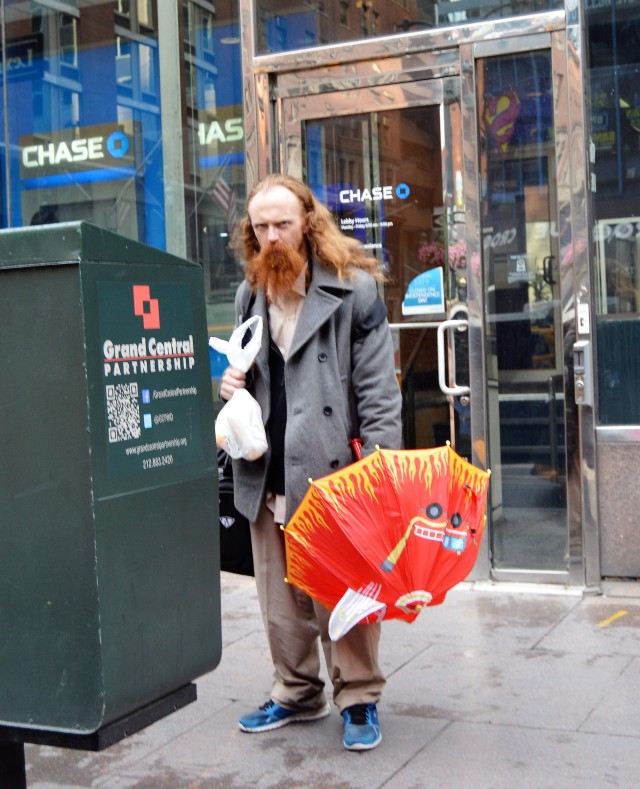 Hey, just look at this guy anyway. His long hair is fire-engine red and his equally fire-engine red beard is almost down to his belt. His fricken umbrella is red too, and festooned with I don’t know what and dangling with odd stuff too. Hey, take a long walk on a short pier, wild and crazy guy, get back into the steam cloud from where you cometh.  You’re a walking advertisement for yourself. Good for you. Just don’t give people dirty looks for reading your sign. Go just the opposite for a change. Buy a set of camouflage fatigues at the Army Navy store. Get a camouflage tarp for the red umbrella too. Then just stop and stand still. You’ll disappear, and be the man with nothing to say.

In your case less might be more. Even silence can be a statement. .

When I look back in the side-view mirror the mist man disappeared. My only proof now is the picture. I give my celestial companion a look.

Barb is smiling and almost off the charts with excitement. For me, it’s a continuation of the search for the real New York, but her interests are more a part of her fiber, her being, and a search for her roots. For her, this part is retracing the footsteps of her grandmother and grandfather. They came this way in 1906, fleeing the pogroms in Russia. Ellis Island was their port of entry, and not long ago. The trees that grew from these roots have only been here for five generations. I wondered what it took for these poor immigrants to abandon their homelands, cut their roots, sail an ocean away, to come here and eventually bare such precious fruit.

Turns out The Battery was a park near the harbor and we got on a ferry.

“Did you know, Pirate Girl, that before you came, San Diego had a ferry?”

Barb was inscrutable, looking out the window of the Statue of Liberty gliding by. 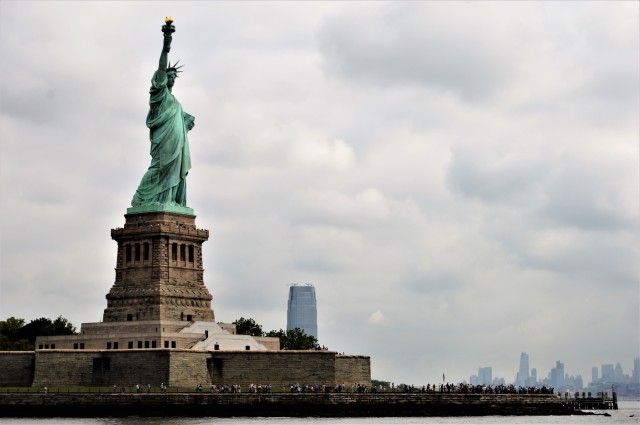 She was wearing her Jimmy Choos. Barb, not Miss Liberty. If you’re reading this, Jimmy, throw some cash my way please, I just plugged your product.

But I know what’s going on in her noggin. She’s being kind.

“He’s blathering away like an idiot again. He’s informing me of something he does know, because it makes him feel secure when he’s surrounded by something he doesn’t know. Poor fellow. You gotta love the guy, he’s so needy.”

An island with an enormous brick building appears. We stumble over the gangplank, too busy looking at the gigantic building instead of our feet. Fortunately, the crew helps us out. When you have a woman as good-lookin’ as Barb with you, crews usually help you out.  Women like Barb bring out the gentleman in us all.

Picture at the sign and up the stairs we go, 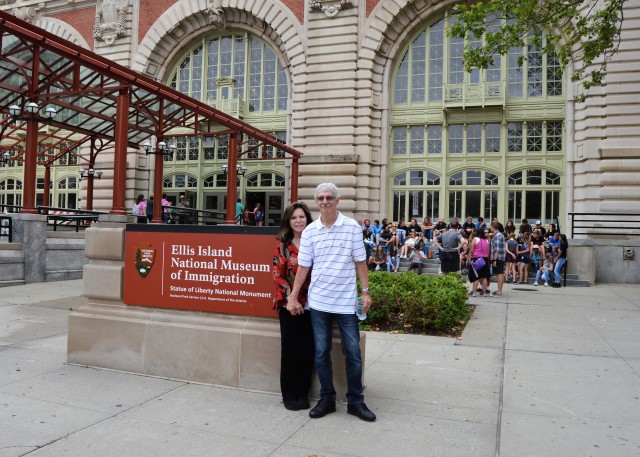 and I have the same impression you get in Europe when you visit a castle or ruin. The stairs are smoother than you expected. Many feet have passed this way, trod up these stairs, and two pairs of those feet were her great-grandmother and great grandfather’s.

I give Barb a look but she’s looking down and lost in thought. Her hair is partially hanging over her eyes, but even in partial profile… the woman is poetry.