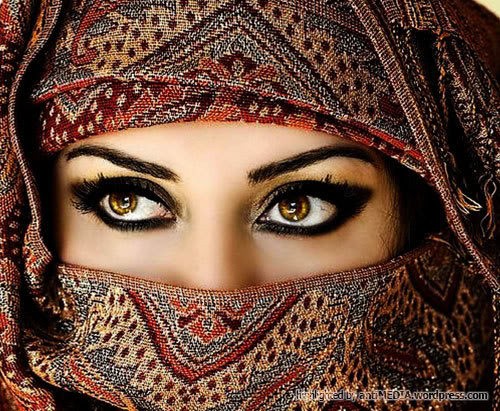 The next night when Richard arrived home no one was there. He searched the house until he noticed a glow from the garden and went out to investigate. From a tent set up on the gravel, brass lamps cast paisley light and shadow patterns on its canvas walls. A lovely barefoot harem girl appeared. Her dark wavy hair streamed down over her shoulders. Her gold necklaces, belt of coins, and arm bangles glittering under pale moonlight could in no way compete with sparkle in her eyes. She stood on ballet toes and kissed him on his savage-scarred cheek.

A transparent veil hung over the entrance and on a cushion laid his outfit. More cushions dotted the floor, and in one corner food in silver chaffing dishes rested on a low table with ivory inlay, and in another corner with even more cushions surrounding it, stood a tall green glass water pipe. Next to that was a scarlet divan and at its foot, black rope lay coiled like an Indian cobra. Saffron perfumed the night’s languorous air, with sensuous spirals of smoke drifting to heaven.

“Are you ready?” came the voice of not just any harem girl, not to his way of thinking.

“In a moment, Princess Scheherazade, Your wish is my command.”

“Some women like to write their own happy endings. Perfume is merely their ink.”

He buckled his belt and thrust his curved dagger with the rhinoceros horn handle into its scabbard with gusto. On the table lay a set of knives, forks, and spoons. He took up a spoon, and saw himself reflected.

“We won’t need these. We’ll have to use our fingers instead. It’s a tradition Isabel will enjoy. I’ll have something to teach her.”

He gathered the silverware and hid it under a brocaded pillow. Next, he twisted and smoothed the ends of his licorice moustache and adjusted his costume. Sir Richard knew exactly what Lady Burton wanted, make no mistake.

The curtain lifted. From the darkness appeared an exotic elegant creature, a princess, a siren determined to put brave Ulysses to shame with her song. Who would be teacher and who would be student had yet to be written.

And somehow the siren resembled his wife.

She slid up on noiseless feet. A veil covering the bottom of her face, that is to say her mouth and chin, ran just under her eyes and was fastened behind her shell-like ears. Her kohl-darkened eyes were all she needed for her ancient craft. She clasped his hand in hers and led him to the viands. Trailing after her scent, his nose first noticed the exquisite patchouli fragrance heated by the warmth of her body, it couldn’t be ignored, and after that, the aroma of savory food.

“Either one will satisfy my appetite,” thought Richard. “It’s only a matter of which will come first. I suppose I’ll have surprise to contend with.”

He helped Isabel kneel down on a cushion and noticed the soles and toes of her small pretty feet. She wore a gold anklet whose charm was chased with the figure of an elephant with lapis eyes. On three toes were turquoise rings.

“Isabel, these things aren’t all mine. Where did you get them?”

“On the same cobble-stone street in town where I get your Darjeeling. The Indian woman with the two lovely daughters is always so kind. Did you know they’re from Calcutta? They all pitched in and made suggestions. I have wonderful things from all over. But first, let’s eat, shall we?”

Richard considered the state of his stomach. What was he hungry for?

Then his eyes admired the billowing gossamer pants emphasizing her round hips and where they narrowed, revealing each delicate inch of her slim waist. Isabel tied a knot between the corners of her silk blouse under her cleavage, urging her breasts skyward until her magnificent twin peaks poked heaven with undisguised ardor like sacred sky-scraping minarets topped with gold moons. Seeing at first hand a supreme example of flesh ascending to spirit brought out the scholar in Richard. Among other things, the man knew his history. He mused,

“That knot is in no way impossible. It isn’t the Gordian knot. It’s something I can handle.”

But still, almost more than he could take. East was east and west was west, especially when it concerned Isabel. The intrepid explorer was forced to swallow and clear his throat. It is said Alexander performed the same action before a bold slice of his sword made him ruler of Asia. In contrast, all Burton had to do was eat a simple meal by coaxing tender lamb kabobs off a bamboo skewer with a flick of his wrist. Fencing was one of the man’s fortes…therefore,

“Yes, Darling, I’m starving,” Richard answered gamely, and whipped out his Damascus steel knife, a Saracen blade reliable as any in Ptolemy’s Geography.

How it glimmered and shown in his desert-sunned hand.

It was time for exploration and a chance seek hidden treasure. Richard was always game for that, because he’d found the perfect mate.